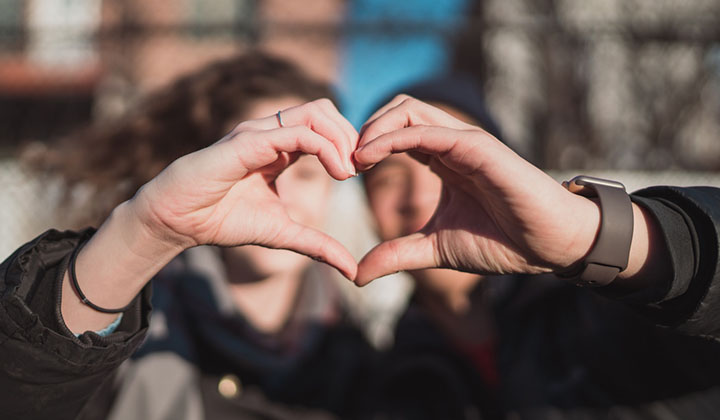 Love makes people and even brands do crazy things.

Around Valentine’s Day, we as marketers are witnesses to a spectacle of companies across the globe trying to stand out through creative campaigns inspired by love, romance, and even heartbreak.

We tend to measure the success of these campaigns through the emotional response and participation of the audiences that come across them. Audience engagement often dictates the direction in which the campaign will go, from either viral success to a public relations disaster.

Here are 3 must-see marketing campaigns inspired by love we thought would bring some inspiration and maybe a few laughs your way.

The Love Twitter campaign launched prior to Valentine’s Day this year showcases real tweets from users and their thoughts on relationships, love, and everything in between. The variety of digital and print displays included cringe-worthy shares of first dates gone wrong to wholesome heartfelt moments from longtime lovers. 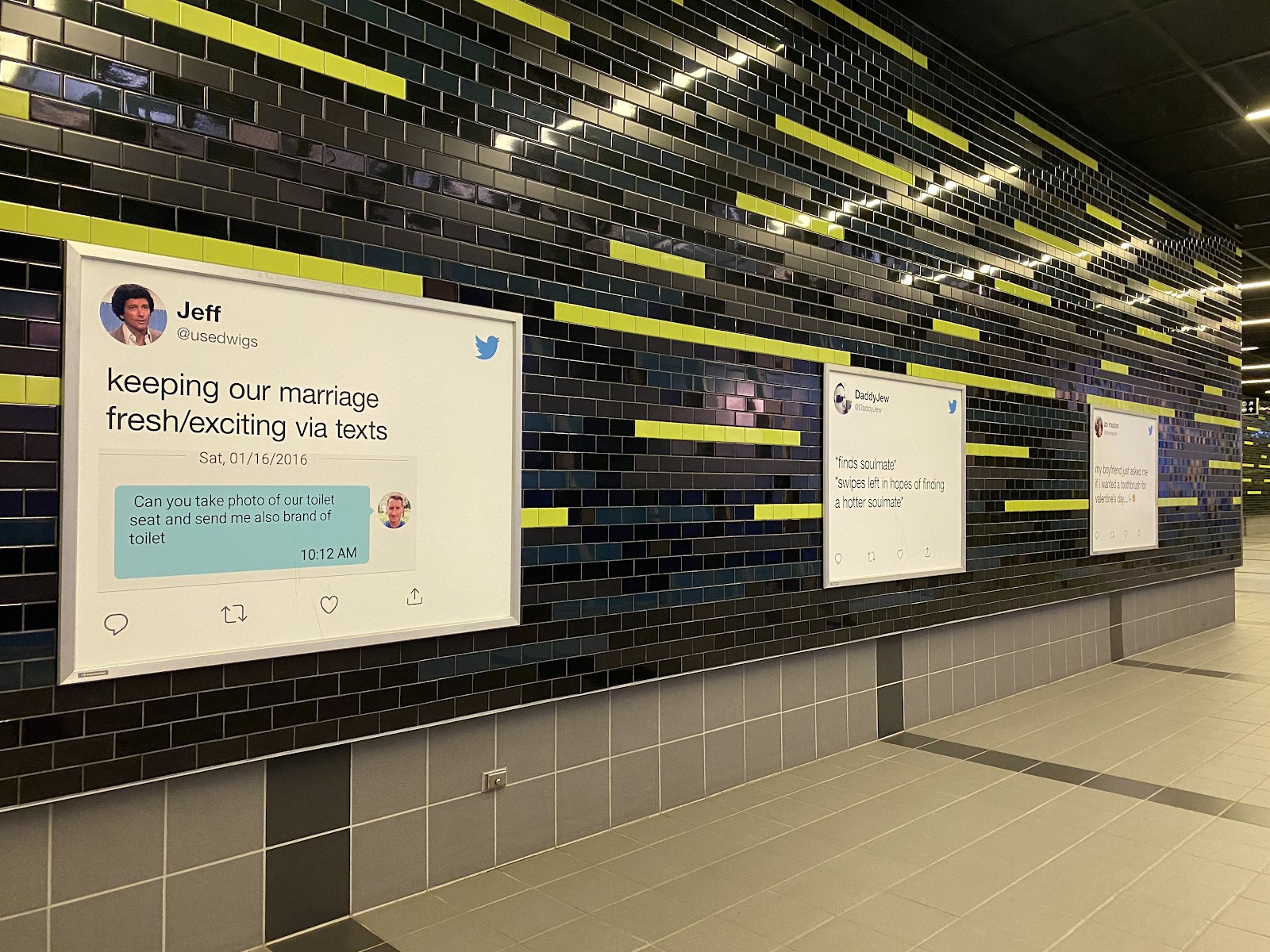 When we break down why the #LoveTwitter campaign has been so successful so far, we looked at the variety of tactics Twitter used to execute their marketing strategy. Twitter is notorious for bringing the online experience offline by leveraging their users own tweets to convey a variety of messaging.

The types of tactics we took note of from the #LoveTwitter campaign include:

Twitter has the benefit of owning the media that their users put on their platform, so it was a win-win when they went searching for tweets relevant to the messaging they were looking to create.

Having access to millions of tweets speaking around keywords such as “love” “relationships” “dating apps” “breakups” provided endless possibilities to pull from and pick a variety of content from.

The beautiful thing about the different tweets Twitter used in the campaign is that it paints a picture that people’s relationship to love can take shape in many ways. From heartwarming to hilarious reactions, the campaign successfully conveyed a spectrum of emotions that all ties back to love.

The next tactic Twitter took to the streets was guerilla marketing. Twitter placed a number of banners, posters and vinyl wrap prints all across subway stations around the United States.

Using the combination of the famous blue bird logo paired with a red heart was one of the signatures used in the campaign. Along with the actual screenshots of the tweets, the only marker to indicate the brand was their logo.

What made this tactic so effective was the brand equity associated with the logo and the fact Twitter could use screenshots of their own interface and their users interactions to create printable assets to distribute on the streets.

And ultimately, the #LoveTwitter campaign wouldn’t be without a hashtag strategy which Twitter is known for. The online community can contribute to the campaign by utilizing the hashtag #LoveTwitter to join in on the conversation.

What’s impressive to us as an agency is the fact the hashtag alone has garnered an average of 1.17 million impressions per day in the last 48 hours.

It’s hard not to give praise to Twitter for their creative use of user-generated content in this campaign, but what we really want to acknowledge along with the success of the campaign is Twitter’s use of:

James Blunt’s Once Upon a Valentine Campaign

A unique twist on valentine cards caught our eye using audio e-cards from James Blunt, the singer behind the popular love song “You’re Beautiful”, in his digital campaign Once Upon a Valentine. The campaign offers users to choose from 14 (we see what you did there, James!) different valentine audio e-cards that you can send to your loved one with a lovely narration from James Blunt himself.

The interesting part of this fun and cute campaign is that the only real push James Blunt seems to be looking for is a subscription to his mailing list. As marketers, we thought it was a savvy way to earn a quick opt-in from users while giving them something out of the ordinary to send around on Valentine’s Day.

Our favourite part of this campaign is you can actively scroll and listen to each e-card available on the simple landing page. From a web developer point of view, we love how easy the interaction on the webpage is and how smooth the interface operates.

And as potential users of the e-cards, we like that there are no pop-ups or surprises to take you away from the actual experience.

The main goal of this campaign was for James Blunt to gain new subscribers to his mailing list. From the landing page, you can select whichever e-card you like and fill out a simple form with your Valentine’s name and email address. They even give the option to keep your identity hidden, and appear as a secret admirer for your special someone.

Why stop the experience at email? The last little feature we took note of in this campaign was the ability to share the e-cards on social. A simple social share widget on the sidebar lets users spread the love with a simple click of a button.

Kudos to the team at Warner Music UK Limited for covering off on all elements to make a seamless user experience.

The level of creativity involved in James Blunt’s digital campaign deserves a round of applause for taking a simple tradition and turning it digital. We appreciate a number of details in this campaign including:

MeUndies Match Me So I Know It’s Real Campaign

MeUndies brought together ‘real couples’ to share what they love about each other and promote their matching underwear sets in their Valentine’s Campaign “Match Me So I Know It’s Real”. The emphasis on stories from a variety of couples with real and raw reactions is what makes this campaign so sweet, it might even make you want to grab a matching pair of your own for you and your partner. 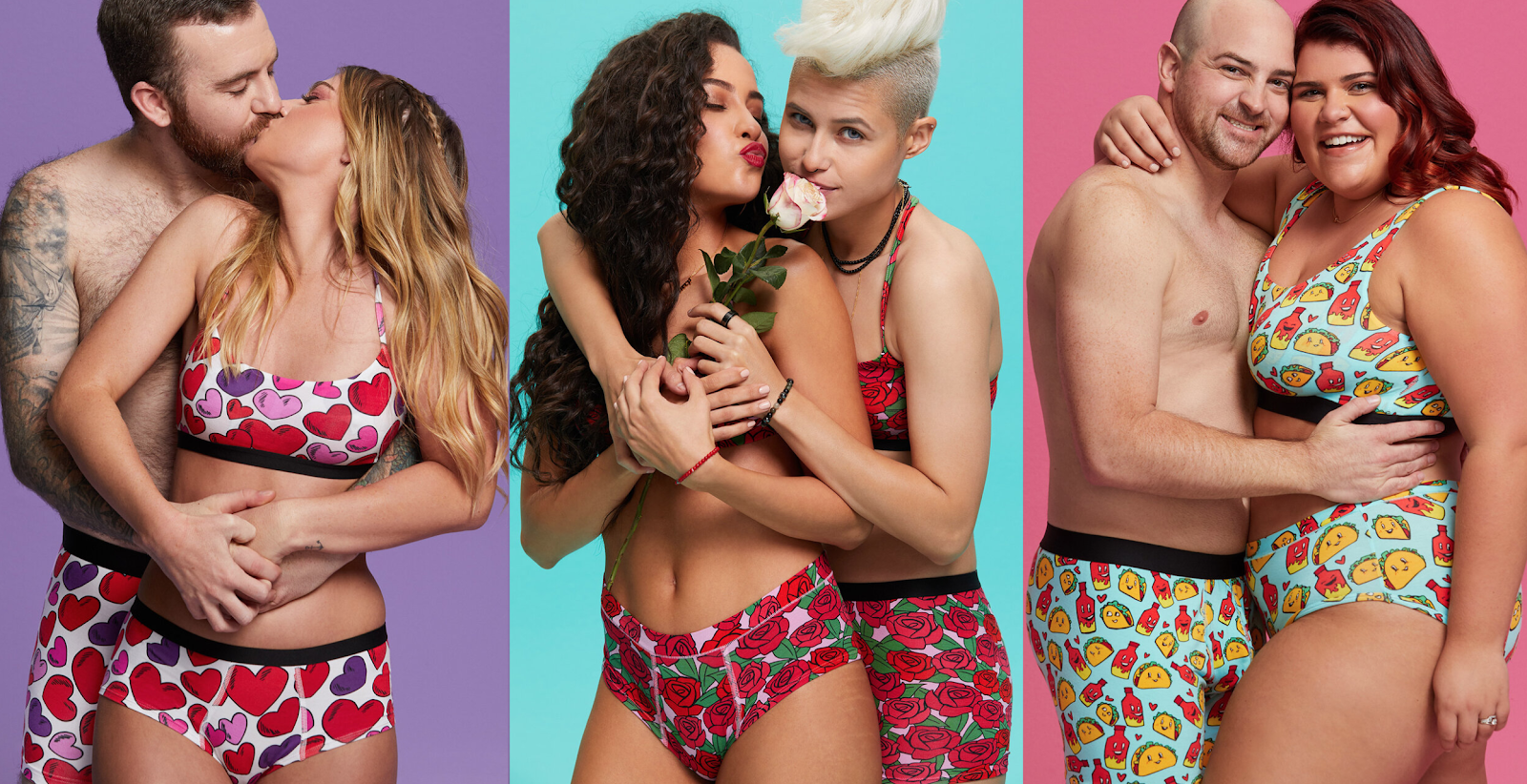 MeUndies rolled out their campaign with a subtle execution, starting with an article on their blog. The meat of the campaign is definitely shared there, expressing the importance that each couple’s story is different, no matter who you are.

Accompanying the blog, MeUndies threw together a series of video interviews with the couples involved to get their love story on camera. These videos were distributed in tandem on social media to create buzz-worthy interactions. 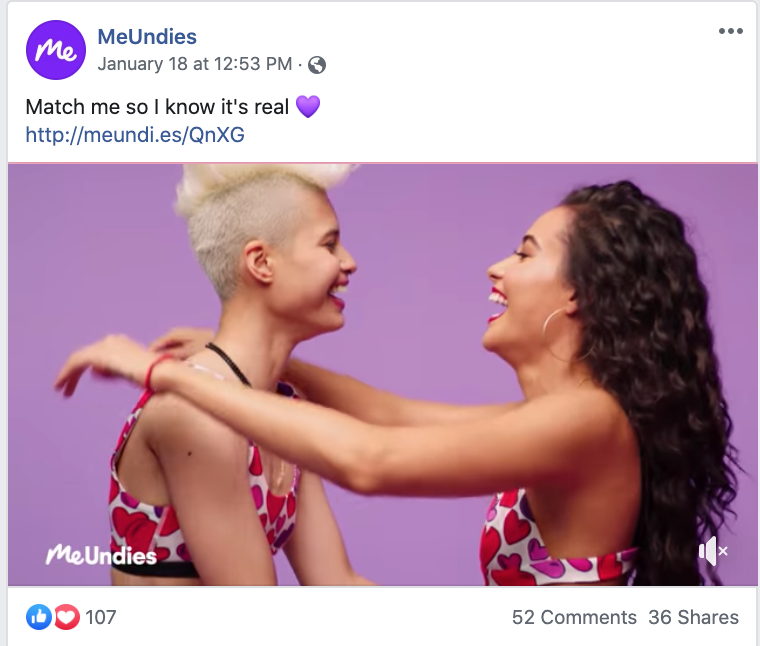 The level of production value is something to appreciate from a creative standpoint, acknowledging they created multiple assets from the campaign shoot to distribute online.

Between the blog and social media, each post and video has a couple share their own story of how they came to be a perfect match for one another.MeUndies is taking a chance to pull at our heartstrings with the combination of messaging and human emotion, that ultimately is inspired by love.

What we find effective in this tactic is that the actual push for their matching underwear products is subtle, so the audience is spending more time focusing on the connection between the couple than the actual products they’re wearing.

Once you make your way to the bottom of the blog, you can choose between their Valentine’s Collection or the matching pairs as seen on the bodies of the couples. With MeUndies operating primarily as an e-commerce company, they have provided customers with the choice of subscribing for a member to receive monthly pairs for you and your partner.

Besides the candid interactions with the couples on camera, we appreciate the range of diversity in the MeUndies campaign. Rather than painting a picture that love looks one way, MeUndies successfully captured the raw and realness that goes along with love. What we thought was extremely effective in this campaign was

What we learned from these campaigns is that the focus on human emotion is relevant to whatever your company or business is marketing.

Whether your organization operates in B2B or B2C sales and services, the person on the other side of the purchase will always be human. We hope that these examples give you a sense of inspiration towards your next marketing initiative to step outside the box and pull for something with more meaning. 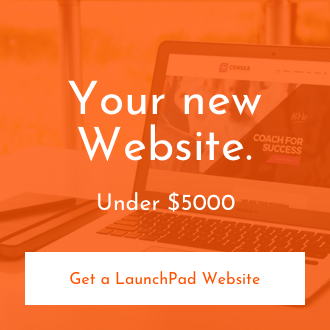 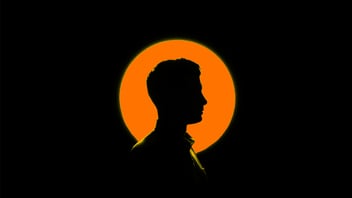 The Key Ingredient to Marketing Your Brand Successfully in 2020

When we look back at how marketing and advertising has evolved over the last decade, we documented ... 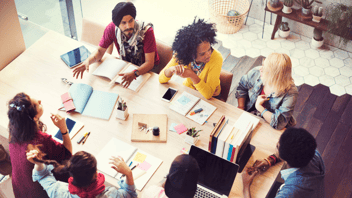 What Is Inbound Marketing And Why Do You Need It?

Consumers today are more empowered. With information in the palm of their hands, a potential...

The difference between lead tracking and conversion tracking

When it comes to tracking analytics, most businesses confuse lead tracking and conversion tracking...